With many apologies for not posting sooner, here's an update on the migration happenings up at Lucky Peak. It's been a great start to the season and the best few weeks are ahead of us (see below for info on two upcoming Audubon Society field trips) so we hope to see as many visitors/bird fans as possible!

In particular, 2009 has been great for the diurnal raptors - both as far as the numbers we're counting and the numbers we're catching and banding - with numbers much higher than in recent years. As one example of a less common species, the hawkwatch crew counted 31 Broad-winged Hawks yesterday (Sept 21), including a kettle of 21 individuals. That daily total exceeds the season totals for all but two prior seasons!! Meanwhile, we haven't banded any Gyrfalcons yet but we have been getting really big numbers of especially Sharp-shinned and Cooper's hawks and American Kestrels. We've also started to see and catch a few Merlins in the last couple weeks and we're hoping that some Northern Goshawks will start appearing with more frequency in the coming days. 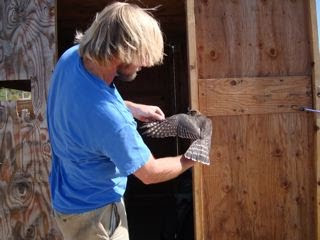 Here's a shot of me holding an immature female Merlin (columbarius subspecies), my best catch of the day last Thursday when MY MOM WAS IN THE BLIND WITH ME!! b/c this is my favorite raptor - photo by Holley Carlisle

Raptors 4,029 migrants of 15 species
Owls 35 owl captures so far (and Saw-whets are just getting started)
Songbirds 3,845 captures of 56 species, several highlights include: 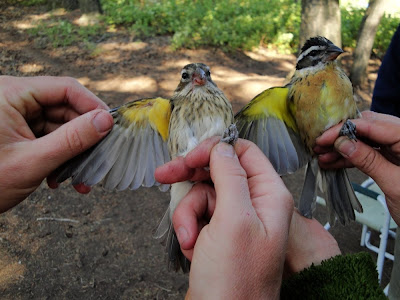 Adult female Rose-breasted Grosbeak (left) that was captured in the same net with this immature male Black-headed Grosbeak (right) on Sept 9, 2009 - photo by Caroline Poli 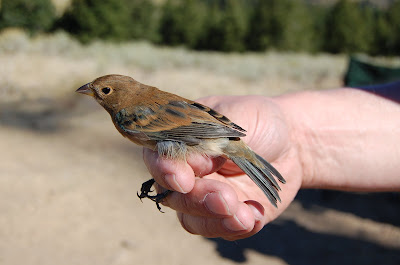 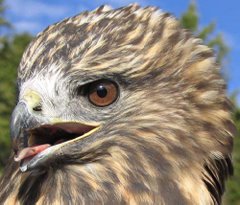